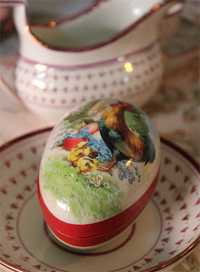 21 MARCH – 30 APRIL
In olden times, April was associated with the dawn goddess Eostre — a time of rebirth, new beginnings, fertility, flowers and egg-laying. There were no rabbits in Britain at this time, only hares, who were also viewed as a symbol of fertility. (In April, hares run about madly fighting, hence the expression “Mad as a March hare”.) Eostre or Ostara may have its roots in the words “east” or “dawn”; Eostre has also been linked with the word “estrogen”. The Anglo-Saxons called this time period Eostre monath or Eastremonath. The mid-point of spring (21 March) or Spring Equinox is a time when days are as long as nights (equi-nox or “equal night”).

A dry March and a wet May
Fill barns and bays with corn and hay.

Ostara is traditionally a busy time, incorporating St Patrick’s Day, Palm Sunday, Good Friday, Easter Sunday, Primrose Day, April Fool’s Day, and many other observances besides. Easter officially falls on the Sunday after the first full moon after the Spring Equinox. It is thus reckoned on a Christian, lunar, and solar basis, reconciling three different calendric elements. It is preceded and enhanced by Lent, from the Anglo-Saxon to “lengthen,” a 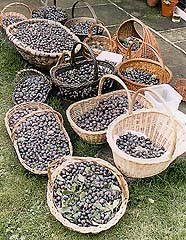 period of 40 days fasting at winter’s end to mark the lengthening of the day until it becomes longer than night. Maundy Thursday — also called Holy Thursday — marked the beginning of the three day celebration of Easter. In England, the custom of washing feet by the Monarch was carried out until 1689. Up until then the King or Queen would wash the feet of the poor on Maundy Thursday in Westminster Abbey. Food and clothing were also handed out to the poor.

During Ostara, the world becomes resplendent with almond, plum, cherries, pear and apple blossom. The last blossoms are from quince in late April followed by medlars in mid-May. In the days when the River Thames at London was wider than it is now, barges carrying oranges and lemons landed just below the churchyard of St. Clements Dane, resulting in the old nu 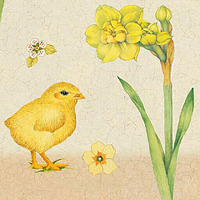 March winds and April showers
Bring forth May flowers.

One of the flowers most associated with March is the wild daffodil (narcissus or ‘lent lily’), the object of William Wordsworth’s famous poem. The first Sunday in April is called Daffodil Sunday. In Victorian times, families picked daffodils from their gardens and took them to local hospitals to give to the sick. A well-known fruit during April is the damson (pictured above), which are often found around sites of Roman camps — perhaps the Romans introduced them to Britain (damson skins have been used to make purple dye since Roman times). It is also said they were introduced by the Crusaders. April 14 is known as Damson Day. 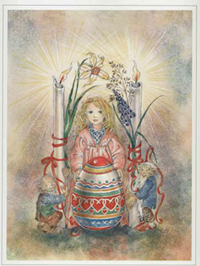 EASTER EGGS
An Anglo-Saxon legend tells how the Saxon goddess Eostre found a wounded bird and transformed it into a hare, so that it could survive the winter. The hare found it could lay eggs, so it decorated these each spring and left them as offering to the goddess. Over the centuries, Britons developed many Easter Egg customs, such as Egg Rolling (whereby hard-boiled eggs are rolled down a hill on Easter Monday) and the elegant patterning of shells to produce Pace or Paste Eggs.

EASTER FARE
In olden times, traditional Easter fare included tanzy (a bitter herb-flavoured cake) and a fig porridge. Easter Biscuits, eaten on Easter Sunday, have also long been popular. They contain spices, currants and sometimes grated lemon rind. In later times, Britons served boiled eggs for Easter breakfast, roast lamb for the main meal and Simnel cake for tea. The Simnel cake is a fruit cake with a flat layer of marzipan (sugar almond paste) baked inside and placed on top. Eleven balls of marzipan are placed around the top to represent the eleven true disciples (excluding Judas). Originally the simnel cake was a gift to mothers on Mothering Sunday in mid-Lent, when young servants and maids were allowed to bake a cake to take home to their mother as a gift.

Hot Cross Buns (rich, spiced tea cakes) were traditionally served on Good Friday. In ancient times, bakers commonly marked their goods by cutting them with the sign of a cross to ‘let the devil out’, warding off evil spirits which could turn the bread mouldy or stale. Other early traditions included keeping the buns from one Easter to the next as lucky charms, or keeping any bread baked on Good Friday to use as medicine later. It was believed that the buns would never go mouldy and they were sometimes nailed up in the house as a good luck charm. Sharing one of these sticky, fruity treats marked with a solar cross is meant to cement friendships, hence the saying: “Half for you and half for me, between us two shall goodwill be!” 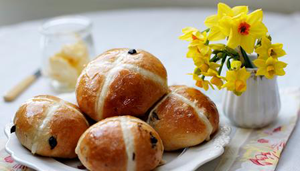 Mix flours, yeast, sugar, spices, and salt into a large bowl. Whisk egg, milk and marmalade together and pour into the flour mixture to form a sticky dough. Knead on a floured surface for 10 minutes until elastic. Add softened butter and knead for a further 5 minutes until smooth. Fold in fruit and peel and knead for further 3 minutes. Fold into loaf type form and divide into 12. Form each twelfth into a ball and then flatten on greased tray 2cm apart. Cover loosely with cling wrap and let dough rise in a warm place for 2 hours until doubled in size. Preheat oven to 180°C. To make the crosses, mix the flour, icing sugar and water into a thick paste. Pour paste into a zip lock bag and snip one of the corners off the bag to create a piping bag. Pipe crosses on buns and bake for 15-20 mins. Turn out on wire rack. To create glaze, bring the sugar and water to the boil until it is a clear syrup. Take off the heat. Apply glaze with a pastry brush while the buns are still hot.

THE CUCKOO
The arrival of the cuckoo in mid-April is the signal that spring has come. The cuckoo sings from St. Tiburtius’ Day (April 14) to St John’s Day (June 24). People once believed that if you should hear the cuckoo sing on St. Tiburtius’ Day, you should turn over all the money in your pockets, spit and not look at the ground! If you do this and are standing on soft ground when you do it, you will have loads of good luck. However if you are standing on hard ground, the cuckoo’s call means bad luck. Various April dates were called Cuckoo Day, and some places held Cuckoo Fairs. Traditionally April 15 was Swallow Day in England, when returning swallows were seen again. 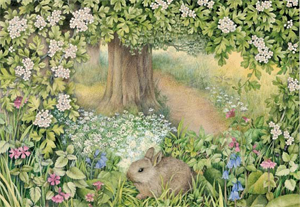 ST GEORGE
April 23 is St George’s Day. The Patron Saint of England, St George frequently appears in Mummer’s Plays during Easter and Christmas celebrations. Mummers’ Plays have been performed in Britain for hundreds of years. They are folk dramas based on the legend of St. George and the Seven Champions of Christendom. It is said that St. George once saved a village from great danger. The village were frightened of a fierce dragon who lived close by, so St George killed the dragon.

COWSLIP WINE
Cowslip flowers (‘fairy cups’) bud between April and May. Herbalists used them to alleviate headaches, and children picked basketfuls for their parents to brew into Cowslip Wine. Says 19th Century botanist and illustrator Anne Pratt, “In the midland and southern counties of England, a sweet and pleasant wine resembling the muscadel is made from the cowslip flower, and it is one of the most wholesome and pleasant of home-made wines, and slightly narcotic in its effects. In times when English wines were more used, every housewife in Warwickshire could produce her clear cowslip wine… the cowslip is still sold in many markets for this purpose, and little cottage girls still ramble the meadows during April and May in search of it… country people use it as a salad or boil it for the tale.” 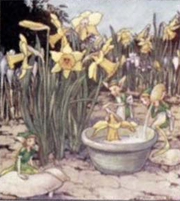 Where the bee sucks, there suck I
In a cowslip’s bell I lie;
There I couch when owls do cry.
– William Shakespeare

Excerpt from Tales of Wych Elm Gate
The next morning, Bess put on her stiffly starched petticoats, her cream Sunday Best and her bead ring and sat at the kitchen table, waiting for Father to hitch Dobbin so they could go to Church. The kitchen door stood open, and fresh spring breezes poured into the farmhouse, bringing with them the dainty fragrance of jonquils and the whistling of the greenfinches in the privet hedge. Everything in the kitchen looked sparkling clean, from the Swiss dotted curtains tied on either side of the kitchen window to the shining stone floor and plump tapestry cushion on Mother’s rocking chair.
Mary was humming to herself as she mixed a bowl of almond paste on the counter. She was about to walk to the next village, for today was Mothering Sunday, and she was baking her mother a simnel cake. The rich fruitcake was already cooling on the windowsill, and Bess watched as Mary spread a thick layer of marzipan on top and placed eleven icing balls in a circle to represent the eleven true disciples, excluding Judas. Mother bustled into the kitchen, pulling on her kid gloves. “Be sure to take your mother some brown eggs, Mary,” she said. “Tillie has been laying ever so many, and we’ve more than enough after Lent.”
“Thank you, marm,” said Mary. “By the by, a bee just flew into the house. I think you shall be expecting a visitor.”
The visitor turned out to be the 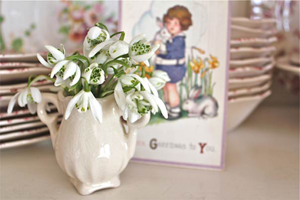 thatchers. They came once a year, Col Webster and his apprentice Allan, travelling to cottages for miles around. They rolled up the Main Road with a cartful of sedge, and spoke with Father for a long time outside the barn. Col Webster was tall and wiry with iron-grey whiskers, and wore a cream embroidered smock-frock in the old country fashion. His brown hat looked like somebody had stepped on it. Young Allan had long yellow hair and never spoke a word, but was superb at whistling.
Father showed the thatchers the corner of the roof where the sedge had discoloured and worn thin. Rain had been leaking into Bess’s Summer Room, where they strung laundry during the cold months. Col and Allan immediately set to work removing the rotted old thatch and pegging down new bundles of sedge with withy rods, and Allan whistled old West Country melodies for hours on end, never repeating himself once. Bess could hear his whistling, high above, no matter which room she went into in the house. It was a spirited sound. The thatchers stayed for a mug of mead and shared cold pease pudding with the family that afternoon, before hitching their cart once more and rolling away down the green-misted lane.
That afternoon, Polly and Bess went foraging. They rambled along the hedgerows and woodland rides, across the meadow and through the Friendly Woods, which were carpeted thickly with bluebells. Polly brought Mother’s cane basket, and they filled it to the brim with wild pennywort and lime leaves, and handfuls of hedge mustard, which Mary called ‘Jack in the Hedge’. Polly dug up wild garlic and Bess gathered “bread and cheese”, the 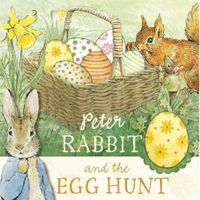 young hawthorn leaves which she could take to school in her lunch pail between slices of new buttered bread. Mary was very pleased when they came trooping into the kitchen, blowsy-haired and pink-cheeked, with their basket full of salad leaves.
“And look at this spring honey,” she said, scooping a teaspoon into the honeypot and holding it up to the window to show them. “It’s so light it’s almost transparent!” It was wonderful to eat freshly-gathered produce again after the long, dark winter.