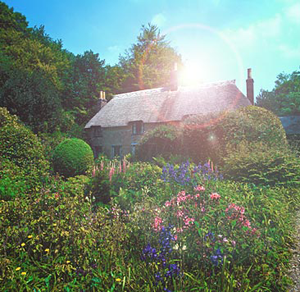 19-23 JUNE – 1 AUGUST
According to the old folk calendar, summer begins on May Day and ends on Lammas, with Midsummer (also known as Litha, the Summer Solstice, Whitsuntide or St. John’s Eve) midway between the two. As the longest day of the year, Midsummer sits directly across from Yule, the shortest day of the calendar year. The sun appears to hang endlessly in the sky, which is why the word “solstice” comes from the Latin for ‘sun stands still’. Ancient stone circles such as Stonehenge were oriented to highlight the rising of the sun on this day.

Robin Hood and the Curtal Friar
But how many merry moones be in the yeere?
There are thirteen, I say;
The midsummer moone is the merryest of all,
Next to the merry month of May.

The old tree gods battle to the death each year on Midsummer’s day. The Oak King (Ogham Duir) is seen as the ruler of the year between winter solstice and summer solstice; the Holly King (Ogham Tinne) rules from summer to winter. At each solstice they battle for power, and at Midsummer, the Oak King takes charge — only to be defeated again by the Holly King by the end of Midsummer. St. John was often depicted as a Pan-like woodland figure with the lower torso of a satyr, cloven hooves and horns. He is 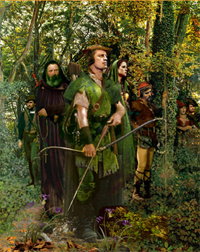 understood to represent both the Oak King and the Wild Man of the Wood. In olden times, druids would take hunt for sprigs of oak-grown mistletoe (the evergreen spirit of the oak), cut them with gold (or any metal but iron) and catch them in a white cloth so that they didn’t touch the ground, to decorate their stone circles and woodland groves.

Midsummer’s joyous rituals honoured the fact that the Sun God had reached his greatest moment of strength, and the Goddess was heavy with pregnancy from the Divine Union at May Day… symbolised by the verdant high summer, when all the riches of nature were in full bloom. Midsummer was thus an auspicious time for hand-fasting and weddings. Lovers joined hands and jumped over the embers of the Midsummer fire three times to ensure a long and happy marriage, financial prosperity and many children. Young people stayed up all night to acknowledge the Midsummer Moon, or Honey Moon, named after the mead drunk during the many wedding ceremonies that took part on this day. Young maidens picked St. John’s Wort in the hopes of divining a future lover: 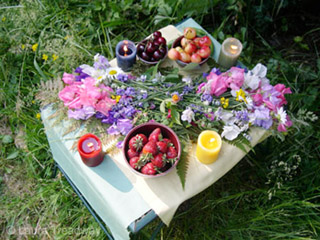 And the glow-worm came
With its silvery flame,
And sparkled and shone
Through the night of St. John,
And soon has the young maid her love-knot tied.

HERBS AND FLOWERS
Many people harvested herbs and plants for medicinal use at Midsummer, when it was believed the vitality of the plants and their energies would be at their most potent. Dew gathered on Midsummer Eve was said to restore sight. Fern, which confers invisibility, was said to bloom at midnight on Midsummer Eve and was best picked then. Five other plants were also thought to have special magical properties on this night: rue, roses, St. John’s Wort, vervain and trefoil. People decked their houses (especially over the front door) with birch, fennel, St. John’s Wort, orpin and white lilies for blessing and protection. People also concocted batches of Elderflower Cordial, linked with the old saying “It is claimed that summer doesn’t start until the elder is in flower”. Roses also held a special importance, as people believed that any rose picked on Midsummer’s Eve or Midsummer’s Day would keep fresh until Christmas. At midnight on Midsummer’s Eve, young girls would scatter rose petals before them and say: 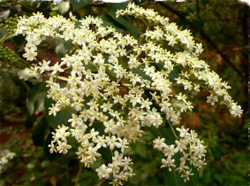 Rose leaves, rose leaves,
Rose leaves I strew.
He that will love me
Come after me now.

Then the next day, Midsummer’s Day, it was believed their true love would visit them. Those who celebrated Midsummer did so wearing garlands or crowns of flowers, particularly the yellow blossoms of St. John’s Wort. Boisterous communal festivities took place with dancing, singing, storytelling, pageantry and feasting. The streets were lined with lanterns and people carried cressets (pivoted lanterns atop poles) as they wandered from one bonfire to another. Often they were attended by morris dancers, and traditional players dressed as a unicorn, a dragon, and six hobby-horse riders. Children made daisy chains, believing that they protected them from being stolen away by fairies. When the two ends of a daisy chain are connected it represents the sun, the earth, and the circle of life.

The young maid stole through the cottage door,
And blushed as she sought the Plant of pow’r;–
‘Thou silver glow-worm, O lend me thy light,
I must gather the mystic St. John’s wort tonight,
The wonderful herb, whose leaf will decide
If the coming year shall make me a bride.

BONFIRES
When they arrived in the British Isles, the Anglo-Saxons marked Midsummer with huge bonfires that celebrated the power of the sun over darkness. It became custom to light large bonfires after sundown, which served the double purpose of providing light to the revellers and warding off evil spirits. This was known as ‘setting the watch’. People often jumped through the fires for good luck. The charred embers from the Midsummer bonfires also possessed protective powers, and were used as charms against injury and bad weather in harvest time. Embers were placed around fields of grain and orchards; some people carried an ember of the Midsummer fire home and placed it on their hearth. 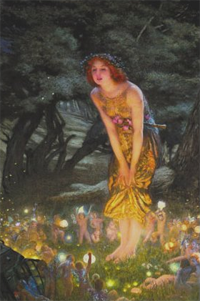 In Gaelic folklore, the hours between dusk and dawn were said to be closer to the underworld and a special time when fairy activity was at its peak. According to British faery lore, Midsummer Night was second only to Hallowtide for its importance to the wee folk, who especially enjoyed a ridling on such a fine summer’s night. Just like at Hallowtide, Midsummer was a time when the ‘veils’ thinned between worlds and bad spirits abounded, hence the Druid practice of wearing white and garlands of flowers to scare them away. Many people used Midsummer to communicate with the spirits of Nature and left offerings — such as food or herbs — for them in the evening. In order to see fairy folk, you had only to gather fern seed at the stroke of midnight and rub it onto your eyelids — and place a little bit of rue in your pocket in case you became ‘pixie-led’! If that failed, folk were advised to seek out one of the ‘ley lines’, the old straight tracks, and stay upon it to their destination. This would keep them safe from any malevolent power, as would crossing a stream of ‘living’ (running) water.

WELL DRESSING
The well dressing season spans from May through to late September, with a number of different ceremonies being held. Springs and wells of fresh water that come from the underground streams have always seem to be magical things, so some wells are honoured with decorations. The decorations consist of branches of greenery and amazingly beautiful pictures made of flower petals and moss. The wells are dressed with large framed panels decorated with elaborate mosaic-like pictures made of flower petals, seeds, grasses, leaves, tree bark, berries and moss. Wooden trays are covered with clay, mixed with water and salt. A design is drawn and its outline pricked out onto the surface of the clay. The design is then filled in with natural materials, predominantly flower petals and mosses, but also beans, seeds and small cones. 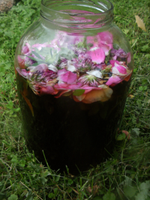 Bring the 3 cups water to a boil. Add the rose petals and lemon juice then turn off the heat and allow it to sit for 8-10 hours. Strain the ‘rose water’ into large jug. Remove petals & discard. Bring the 2 cups of water to a boil, remove from heat and place in the tea bags. Brew for 5 minutes. Remove the tea bags, and add the granulated sugar to the tea. Stir. Allow the tea to cool then add the 2 tsp rose water, the food colouring and stir. Serve well chilled over ice.

It was a perfect summer morni 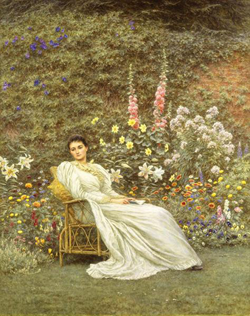 ng, and Bess was humming to herself under the lime tree. The branches were resplendent with sweetly scented blossoms under a cloudless blue sky, and Mary had sent her out with a small pail to pick them, to be dried in the aumbry and used as a sleeping draught. The sunlight felt golden-warm against Bess’s back, and even though she was due to come back inside and help Polly clean and fill the lamps, Bess slipped along the privet hedge and slunk into Mother’s cottage garden.
She passed under the rose-bowered trellis and entered a riot of colour. Vegetables, herbs, fruit trees and flowerbeds were jumbled together in the most delightful way. Pansies and germander clustered thickly around a rustic wooden bench, deep-hued hollyhocks and tall lupine nodded in the sunlight, and bees tumbled in and out of the Canterbury bells and sweet william. The path, with its crazy paving and thyme growing in the interstices, zigzagged through the flowerbeds and ended beneath an espaliered apricot tree, with a pear tree and lemon tree standing guard on either side.
In one corner was an old wheelbarrow overflowing with cottage pinks; in another corner grew gooseberries and an old redcurrant bush. The heavy scent of Damask roses hung in the air, and delicate clematis climbed one side of the farmhouse, framing the kitchen window. Along the eastern side lay the kitchen garden, which Mary called “the potager”, with its leek 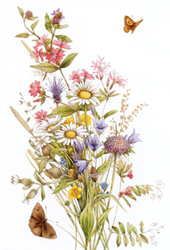 s and rampion, onions and turnips growing in perfectly straight rows. Mother had placed an old yellow-and-red-painted carriage wheel in one corner and planted herbs between the spokes: tufts of marjoram, sage, parsley, chamomile, fennel, soapwort, mint, wormwood, caraway and sweet woodruff scented the breeze. Clementine rolled around in the catnip borders, upsetting a large watering can. Mother’s cottage garden was the dreamiest, most magical place in Wych Elm Gate, and Bess lay quietly on her stomach, hiding amongst the rosebay willowherb, dozing in the sun and feeling the tickle of a ladybird crawling up one finger.