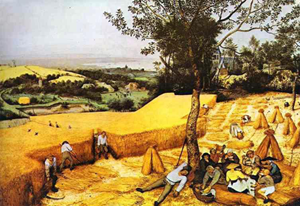 1 AUGUST – 21 SEPTEMBER
Lammas is the first of the three Harvest Festivals. Lammas was considered to be Thanksgiving time (harvest time for wheat and corn) in old England, and church bells could be heard on each day of the harvest. Its arrival marked the end of summer and the coming of autumn, the days slowly becoming shorter. It occurred in the dog days of summer when the first grains were ready to be harvested and threshed, apples and grapes were ripe for picking, and country folk were grateful for the food they had on their tables. Lammas symbolises the fading power of the Sun-King Lugh, and calls attention to his willingness to sacrifice himself to the Moon Goddess so that the fruits can ripen and the crops can grow toward their harvests. The Celts celebrated this festival from sunset August 1 until sunset August 2 and called it Lughnasad after Lugh, whose light begins to dwindle after the Summer Solstice. It is thus a time of transformation, rebirth and new beginnings.

While Lammas symbolises abundance, prosperity, wellness, nourishment and sustenance, there’s a darker side to its presence, too: the reaper of the harvest wields a scythe that also cuts, severs, lays the field bare and creates permanent change. Loss is just as relevant a theme during the harvest season as abundance. Hence the important balance of ‘light and shadow’ that occurs during this time of the year: that for every sheaf gathered to table, a barren stalk withers in the field. Despite this, Lammas was traditionally a merry celebration — a time of fairs, hand-fastings and harvest feasts. After the harvest was safely gathered, there was a celebration sometime in August known as the Harvest Home.

It was on a Lammas night, 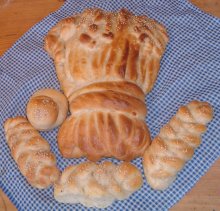 When corn rigs are bonie,
Beneath the moon’s unclouded light,
I held away to Annie:
The time flew by, wi tentless heed,
Till ‘tween the late and early;
Wi’ sma’ persuasion she agreed
To see me thro’ the barley.
– Robert Burns

This season of eating, drinking, and making merry was known as hlaf-maesse, or loaf mass in Old English. In many parts of England, tenants were bound to present freshly harvested wheat to their landlords on or before the first day of August. This practice is referred to regularly in the Anglo-Saxon Chronicle, where it is called “the feast of first fruits”. The first sheaf of wheat was ceremonially reaped, threshed, milled and baked into a loaf. To bring good luck, farmers would let the first corn bread go stale and then crumble it over the corners of their barns. In early Ireland, it was a bad idea to harvest your grain before Lammas — it meant that the previous year’s harvest had run out early. On August 1, the first sheaves of grain were cut by the farmer, and by nightfall his wife had made the first loaves of bread of the season. In some parts of the British Isles, young maidens were invited to cut down the final sheaf. The one who was able to do so in a single stroke of the scythe was guaranteed to be married within the year. The cutting of the final sheaf meant that the grain harvest was over. Now bread baking could begin, and food stored away for the coming winter months.

Lammastide involved the baking and giving of small bread loaves made from the harvest grain. For extra kitchen-witch magic, shape your dough in the figure of a man or a woman and give your grain-person a name. If he’s a man, you could call him Lugh, the Sun-King, or John Barleycorn; if female, try She of the Corn, She of the Threshing Floor, She of the Seed, She of the Great Loaf (these come from the Cyclades, where they are the names of fertility figures), or Freya (the Norse fertility goddess a.k.a the Lady and the Giver of the Loaf).

When baking bread, honour the source of the flour as you work with it: remember it was once a plant growing on Mother Earth. If you have a garden, add something you’ve harvested — herbs or onions or corn — to your bread. When your dough figure is baked and ready to eat, you might want to share a few crumbs with the birds in your garden, as a Lammas offering. Tear your warm loaves apart with your fingers and invite your loved ones to feed hunks of bread to each other, putting the food in the other person’s mouth with words like “May you never go hungry”, “May you always be nourished”, “Eat of the bread of life” or “May you live forever”. Offer each other drinks of water or wine with similar words. Lughnasad is one of the great Celtic fire-festivals, so if at all possible, enjoy your feast around a bonfire… a crackling hearth… or at the very least, a candelabrum!

Dissolve the sugar in the water and add the yeast, then leave it in a warm place for 15 minutes, or until frothy. In a bowl, add the salt to the flour, then rub in the fat. Stir in the yeasty water until it forms a stiff dough that leaves the sides of the mixing bowl clean. Then either knead the dough by hand on a floured surface or use a food processor until it is no longer sticky. Oil the mixing bowl, put the dough back in it, cover it with a clean cloth and leave the dough to rise in a warm place. It should double in size. Then knead the dough once more, divide it in two, and put it into two bread tins (or make two big balls of dough and put them on baking trays). Leave them to rise again for 1.5 hours, then put them in a preheated oven at 230C for about 40 minutes or until brown. 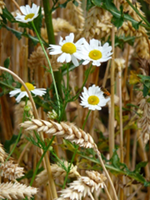 HARVEST DECORATIONS
Lugh was also known as ‘the skilled god’ or craftsman god, making Lammas the perfect time to celebrate talents and craftsmanship. It’s a traditional time of year for craft festivals, and for skilled artisans to peddle their wares. In medieval Europe, guilds would arrange for their members to set up booths around a village green, festooned with bright ribbons and fall colors. You can follow this theme by getting crafty around the home. You might decorate your house or Lammas altar using: 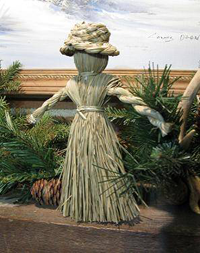 Corn Dollies or Kern Babies are an ancient Lammas tradition; made of the last stalks of corn to be harvested (the corn shucks symbolising sunbeams), sometimes these dolls were full-sized, and decorated with ribbons, streamers and even articles of clothing. Ivy was a symbol of rebirth, and so it wasn’t uncommon to dress the corn doll with a headdress of ivy. People believed that the corn goddess lived in the corn and would die when the corn was harvested unless some of it was saved. So to make sure the corn goddess stayed alive until next spring sowing, a plaited straw ornament or Corn Dolly was made from the last sheaf of corn for the corn goddess to rest in until the next. The Corn Dolly often had a place of honour at the harvest banquet table. In some rural areas, the corn doll was kept in a place of honor at a farmhouse in the village, until it was time to make one the following year. At that time, the old one was ceremonially burned.

HARVEST FESTIVALS
Harvest Festivals were traditionally held on or near the Sunday of the Harvest Moon,  the full Moon that occurs closest to the Autumn Equinox (about September 23). At the start of the harvest, communities would appoint a strong and respected man of the village as their Lord of the Harvest. He would be responsible for negotiating the harvest wages and organising the fieldworkers. It was also his responsibility to bring the last snook (sheaf) of corn back to the farm to officially declare the harvest safely gathered in before the Harvest Feast started. This occurred with great merriment and fanfare amongst the farmhands and locals; even the horse, bringing in the last cart load, was decorated with garlands of flowers and colourful ribbons. The end of the harvest was celebrated with a big Harvest Supper or Feast, held at the farmer’s house on Michaelmas Day. The Lord of the Harvest sat at the head of the table, and games played to celebrate the end of the harvest. A goose stuffed with apples was eaten along with a variety of vegetables. Goose Fairs were and still are held in English towns at this time of year.

In English folklore, John Barleycorn is a character who represents the crop of barley harvested each autumn. Equally as important, he symbolises the wonderful drinks which can be made from barley — beer and whiskey — and their effects. In the traditional folksong, John Barleycorn, the character of John Barleycorn endures all kinds of indignities, most of which correspond to the cyclic nature of planting, growing, harvesting, and then death. Ultimately, the character of John Barleycorn is a metaphor for the spirit of grain, grown healthy and hale during the summer, chopped down and slaughtered in his prime, and then processed into beer and whiskey so he can live once more.

Farmer Trickett owned the largest acreage in the area, and he had left the last corner of his southernmost field unmown on purpose for Polly and Sam. As the wedding party came traipsing merrily down the lane, all ribbons and garlands and cheers, the labourers dozing in the shade of the horse chestnut tree leapt to with their scythes and pitchforks. Amidst much hand-clapping and triumphant shouts, the last sheaf was quickly gathered.
“Come, bridegroom,” ushered Farmer Trickett, wearing a headdress of wheat sheaths. “I dub thee, Sam Willcott, Lord of the Harvest!” Sam bo

wed his head, accepted a wheat crown of his own, and threw the final snook of corn onto the waiting cartload. Farmer Trickett put his hand on the horse’s bridal, which had been decorated with decorated with ribbons, corn animals and sprays of red berries. “I officially declare the harvest brought home,” he cried. “May the Harvest Feast begin!” All the Village children scrambled to climb aboard, irreverent of their fine clothes, and the entire crowd – villagers, wedding party, farmhands, labourers – headed back to Farmer Trickett’s enormous thatched barn amidst much shouting and cheering.
The barn’s doors were thrown open and colourful flags and streamers fluttered from the surrounding hazel trees in the wind. Straw love knots, kern maidens, dried flowers and rosettes hung from the barn roof; harvest wreaths hung on each of the great wooden doors. Inside, long wooden trestle tables were laden with harvest decorations and displays: garlands of wall barley, red apples, dried quinces and poppy pods, pyramids of fruit and boughs of russet leaves. The revellers streamed in and around the barn, filling mugs with scrumpy from barrels, laughing and yelling and slapping each other on the back. 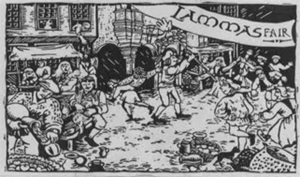